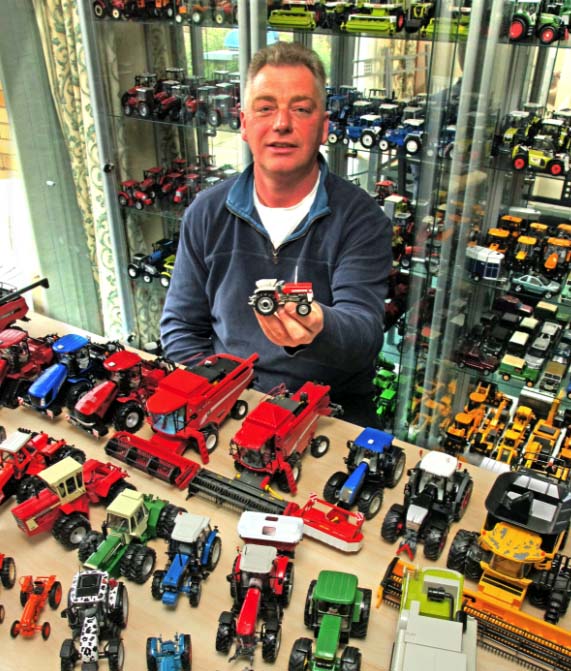 A WACKY farmer has amassed a bizarre collection of hundreds of model tractors and  combine harvesters.

Obsessed Mark Williams has collected the agricultural vehicles for 40 YEARS since he was a young child.

He now keeps his collection of almost 500 model in an unassuming semidetached house in Towcester, Northants – and its still growing.

It all started at the age of four, when Mark saved his 6d-a-week (2.5p) pocket money, and was taken to his local toy shop, Pickerings, in Shrewsbury, where he bought his first model tractor, a Red Massey Ferguson 135 from the early 1970s.

And he has been adding to his collection ever since and says he simply cannot stop.

Mark said: “My father was a farm worker and a sugar beet worker so I probably got my interest in agriculture, and the vehicles that go along with it, especially tractors, when I used to see dad at work.

“When I left school I did a YTS scheme on a local farm and have been a tractor driver and farm hand since”.

His collection has spread all over the house with display cabinets full of models in nearly every room.

His two daughters, aged 16 and one 14, are not interested in going into farming and, unsurprisingly, even less interested in collecting model tractors.

Mark added: “All my family always add to my collection on birthdays and at Christmas as they know it’s always a safe bet.

“I have bought six in the past week. I go to toy fairs, look on the internet, and when I have time, go to car boot sales.

“I picked up a little bargain last year when I spotted a white Ford County 1884, battery-powered model tractor from the early 80s, which I got for GBP6 and I knew then it was worth at least 10 times that amount.”

Mr Williams’ most valuable tractor is a blue Fordson Major made by a company called Britain, worth more than GBP200.

He has his own workshop where he mends old models that he has bought, and tinkers around with the ‘good’ ones adding a new set of tyres, or sticking an appropriate logo on the side of a vehicle.

And it seems collectors are drawn to him.

“It was the first time I had seen her speechless. Collecting tractors seems quite tame.”