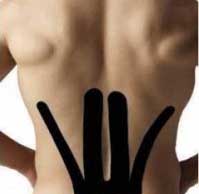 In his struggle to complete his triathlon for Sport Relief, he endured crippling pains and was seen wearing kinesio tape, therapeutic tape that provides support and compression for injuries.

As he reached the end point in London his wife was their to great him with a hug, he later admitted he was ‘blown away’ after being told he had raised a staggering £1.6m for the charity.

The grueling five day triathlon started in Paris and ended in London, at times it looked like he might not be able to complete it as he had to have physio and acupuncture towards the end of the five days.

But he overcame his back and shin problems and ran the three marathons in the same amount of days.

Giving him an extra boost two out of three of his sons turned up to run with him through London, along with footballer Robbie Savage.
Hundreds of fans greated him as he completed the five day triathalon, chanting ‘Bishop, Bishop’ as the Liverpool anthem ‘You’ll never walk alone’ played.

The modest comedian insisted it was his fans that deserved recognition by helping to raise so much for vaccinations for African children.

The money raised will go towards vaccinating 250,000 children in Africa, as well as help with projects in the UK.