A RARE letter predictingdeparture from the throne has been unearthed providing a fascinating glimpse behind the closed doors of the exclusive London clubs frequented by Lords and other influential characters of the time including Winston Churchill. 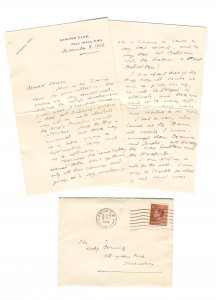 Dated December 8 1936 – just three days before the king abdicated the throne – the gossiping letter foresees the stark choice the monarch had to make between his country and the woman he loved.

The four-page note, thought to written by Thomas Henry Noel-Hill  – 8th Baron Berwick of Attingham – eerily predicted that the king would be forced to vacate his throne if he did not end his scandalous relationship with American socialite Wallace Simpson

Though the abdication crisis debate, which raged for around a month, was conducted largely outside the public’s gaze, letters such as this auction lot show that it was very much a hot topic of conversation for the elites of the time.

Written on headed paper bearing the symbol of Pall Mall’s ultra-exclusive Carlton Club, the self-proclaimed “oldest, most elite, and most important of all Conservative clubs”, the letter gives a rare insight into the upper-class gossip surrounding Edward VIII’s imminent departure from the throne.

Addressed from ‘Tom’ to ‘Lady Berwick’ the letter, which is due to go under the hammer next week, repeats several rumours that were being spread in London’s privileged circles immediately prior to Edward’s abdication.

One of these is that Wallace Simpson’s divorce, for which she filed only a month earlier, may not be proceeding as planned.

The author wrote: “What I heard at lunch is that Mrs Simpson’s divorce may not be made absolute…there may be a hitch.

“I heard Baldwin’s speech yesterday but there was such a crowd in the Peer’s gallery I was at the back and could see nothing.

“Winston [Churchill] had a very bad reception. It seems he is plotting (he upset Baldwin I suppose or just to make mischief).

“Most of these silly people like Lord Mansfield are following him.”

And the author points to a growing impatience within parliament at the king’s apparent inability to choose between the throne or his lover.

He wrote: “But the feeling in London evidently is getting very indignant at the indecisions of the King.

Richard Westwood-Brookes, historical documents expert at Mullock’s Auctioneers in Ludlow, Shropshire, said that the letter provides a rare first-hand account of the abdication crisis as it unfolded.

He said: “Here you have got somebody who was witnessing the events as they were happening, and a member of the House of Lords who would have seen it unfold in Parliament.”

He added that the letter shows that the crisis, the like of which had never been seen before, plunged parliament and the Lords into chaos as they struggled to deal with the implications of it.

“In a sense it shows the complete confusion that was going on three days before the king abdicated.

“It isn’t clear whether or not Mrs Simpson’s divorce is going to go through or not, it just shows what a shambles the whole thing really was.”

Mr Westwood-Brookes said that the letter gives a more realistic take on the often-romanticised events of the time including Madonna’s recent directorial effort, ‘W.E.’ which he felt offered a more straightforward explanation of the incident.

He said: “Looking at events as they are portrayed in on TV or in films such as the one Madonna did recently, you are given the impression that it was all due process between the government and their legal advisers and the king and his legal advisers.

“But in reality, as this letter shows, it was all a complete mess.”

And Mr Westwood-Brookes added that letters from the period such as this one are “highly sought after” by collectors because they give an insight into a one-of-a-kind event in Britain’s history.

He said: “It goes to show what a terrible mess everybody got themselves into, it was an unthinkable development.

“Edward the VIII was the first king to have left the throne by means other than death since James II.

“It just shows what total turmoil they were all in.”

“We lurched into what became the abdication crisis through blunder.

“It was a total blunder on all sides.”

The letter is expected to fetch between £100-200 when it goes up for auction on March 8.