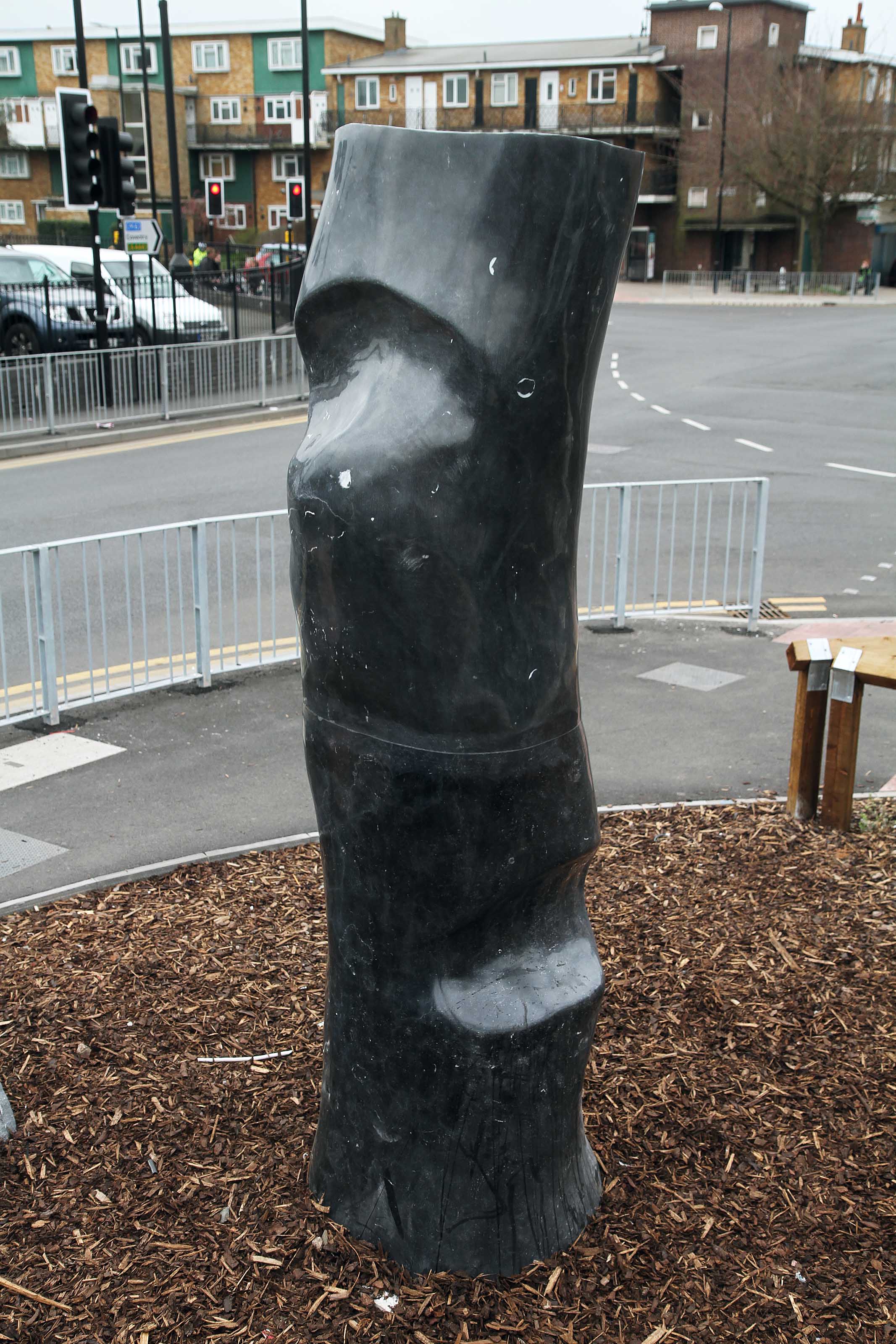 This is the tree-trunk like sculpture that has been unveiled in a town centre to commemorate its mining industry – but outraged locals have blasted it a ‘monstrosity.’

The three-metre tall block of black marble is creating controversy among townsfolk and heritage supporters in Bedworth, Warwickshire.

A metal plaque gives a description of it as “replicating a miner’s grip on a pick axe handle as he hacked coal from its seams.“

However, locals have labelled it a ‘wasted opportunity.’

The sculpture has been put up as part of the new #27million Tesco supermarket development and stands on the corner of Mill Street and George Street Ringway.

But the reaction has been far from favourable, with Bedworth Society secretary Denis Baylis saying: “It is clumsily put together into what is supposed to be a column.“

He added: “The concept of coal and the toil of miners over the years to extract it could have been a promising theme, but here it comes out as contrived and banal.

“It leaves me seething to think of the wasted opportunity to provide a worthy public monument that would mean something to local people.“

Local resident Margaret Woods described the sculpture as “weird“ and added: “It looks like a tree trunk with dents.

“My dad was a miner but I do not think much to this being a tribute to the coal industry. It’s a monstrosity.“

Phoebe Lenton, who hails from California but has lived in Bedworth for 14 years, said: “I had to read the plaque to realise that it was in remembrance of coal miners, which is nice because my father worked down the pit in Kentucky.

“But I’m sure this could have been done in a more appropriate way and would certainly look better with a few flowers around the base.“

Peter and Elaine Starkey would rather have seen some recognition of one of the town’s landmark businesses.

“Starkey’s butcher’s shop stood on this very same spot for more than 100 years and was run by a distant relative,“ said Elaine.

“It’s a shame that some thing has not been put here to preserve the shop’s memory.“

However, former miner Tony Murphy, of Mount Pleasant, was in favour of the sculpture.

He said: “I think it’s quite good.

“Everyone has different views about art and I think it complements the pit-head wheel in the park.”

The artwork was carved out of Kilkenny Limestone by Leicestershire sculptor Graeme Mitcheson, who took an imprint in clay from 91-year-old former local pit worker Don Spark and used the inspiration of designs by students at Nicholas Chamberlaine School in Bedworth.