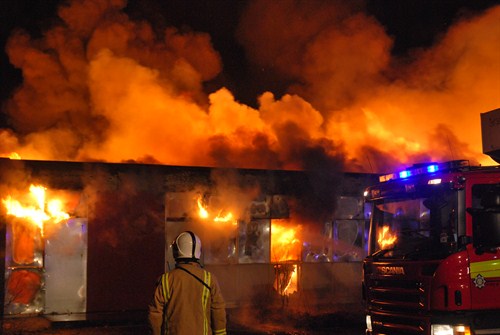 Strathclyde firefighters have managed to get a blaze under control at a disused school in Glasgow.

Crews were called to the scene at Westercommon Primary School shortly before 3am this morning (February 26th) and were met with a “well-developed” fire that engulfed around 30 per cent of the building.

Two aerial rescue pumps were scrambled to the site of the inferno and were used as water towers as crews surrounded the building with mains water jets.

At the peak of the blaze, 35 firefighters were in attendance and incident commander Eddie Mullen praised their efforts.

“They worked tirelessly in difficult conditions to prevent the spread of fire to other parts of the building and the neighbouring properties. The fire was quickly contained and is now under control however crews will be on the scene for a considerable time,” he said.

Scottish Power also attended the scene, although nearby power lines were unaffected by the blaze.

A joint investigation is set to be launched by Strathclyde Fire & Rescue and Strathclyde Police into the cause of the fire, which is currently unknown.

Firefighters in the area were called to a second blaze shortly after 6am this morning in Sumburgh Street, Glasgow.

Crews from Easterhouse and Calton managed to quickly extinguish the fire, although one individual was pronounced dead by ambulance staff at the scene.