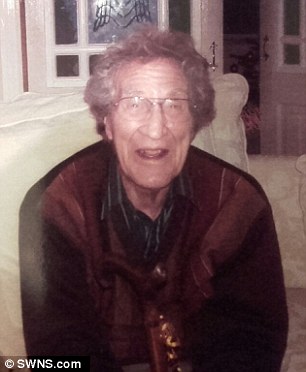 An elderly jeweller who died less than a year after being brutally attacked on his doorstep had been “turned into more of an old man” by the vicious assault, an inquest heard.

Colin Butlin was 89 when knuckle-duster wielding Slovakian thug Viktor Lakatos attacked him from behind, as he opened the door to his home on November 21, 2014.

An inquest into Mr Butlin’s death heard “blows were raining down upon him and he was defenseless” and that he was left on the ground “bleeding heavily”.

Lakatos was later handed an 18-year-extended sentence for the vicious beating, which left the dad-of-three with wounds to his forehead, which had to be stitched as well as extensive bruising and a fractured nose.

A silver knuckle-duster, which held Lakatos’ DNA was found at the scene of the attack.

An inquest heard today (Thurs) that the attack had more lasting effect on Mr Butlin, who passed away in August last year.

In a statement by his daughter Linda Butlin, 52, read in court, she said: “It definitely affected him, he was really stressed out because of it.”

The college lecturer added: “He turned into more of an old man.”

Halifax Coroner’s Court, West Yorks., heard that Mr Butlin, who was 90 when he passed away at his home, didn’t like to leave the house, became less sociable, and had contracted shingles since in the months following the assault.

It was Miss Butlin who found her father lying half out of partly run bath on the day of his death, after she had brought him round his dinner.

Mr Butlin had most likely started to run a bath when he got into it, slipped, knocked himself unconscious and the then asphyxiated because of the position he fell, the inquest heard.

The post mortem into his tragic death stated that while the attack my have left Mr Butlin, of Halifax, less sociable and depressed it “did not play a direct part in his ultimate demise”.

Passing a verdict of accidental death, coroner Oliver Longstaff told the court “no gentleman his age should suffer such a vicious and calculated assault”.

He told his daughter, who attended the proceedings that he was entitled to live out his life in peace and safety.

“The years of peace and safety were shattered by a cowardly and brutal assault,” he said.

Mr Longstaff added: “The vicious assault he suffered played absolutely no part in his death.”

The cause of death was given as positional asphyxia.

Speaking after the hearing, Miss Butlin said she was happy with the outcome of the proceeding but added that she felt her dad was emotionally different after the attack.

“Oh yeah, he was a feisty old bugger my dad, you know he had had pneumonia twice but still gone back to work, but after this attack he went back for about three weeks.

“Then the house was in darkness and he would warn us about things.

“It did turn him into an old man, I mean he was an old man but he was so bright and funny, but it turned him into a doddery old man.

Speaking about the sentence her father’s brutal attacker was handed, she said: “The sentence was quite a shock but I think fair enough if it keeps the guy off the street.”

Lakatos, 42, went on the run after the barbaric attack and the case even appeared on Crimewatch as police sought to track him down.

The sickening criminal had previously served a six-year jail term in native Slovakia for grievous bodily harm before coming to this country.

Lakatos pleaded guilty to the robbery charge at the last minute – as he claimed he had only been acting as the getaway driver.

During his case, the court was told father-of-two Lakatos was desperate for money after problems with his benefits.

Speaking through a Slovakian interpreter, he told Lakatos: “As robberies go it is within the category that may be described as the worst examples of its kind.

“For you targeted, attacked at his front door, gratuitously and excessively beat with a knuckle-duster an 89-year-old gentleman.

“Not just cruel, not just wicked, not just gratuitous and uncivilised, certainly by our standards, it was cowardly in the extreme. It was barbaric.”