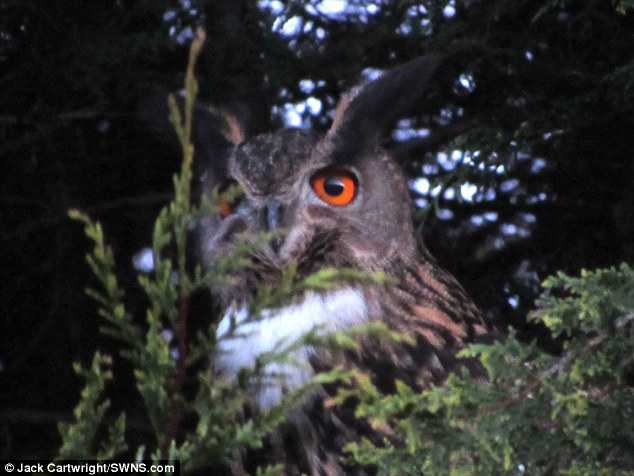 There are fears a giant owl on the loose in a British city has started to target – BALD men.

The massive eagle owl with wingspan of more than 6ft has left a series of follicly-challenged victims bloodied and bruised.

The eagle owl – known by its scientific name bubo bubo – was believed to have disappeared from our skies a few thousand years ago.

But they became a popular pet in recent years, especially among Harry Potter fans due to the love of the fictional wizard’s pet Hedwig.

An escaped one is now on the loose in Exeter and victims include Richard Clevedon Smith, 49 – who says his shiny top prompted to swoop on him on his way to work.

The bus driver says the bird of prey, that has a went for him at around 4am as he walked to the depot.

Dad-of-two Stagecoach worker Richard said: “I was walking when I heard this hooting noise, really quite loud and booming.

“I looked around. It was dark but the hooting was getting closer. Then I saw this big bird coming down on me, its wings outspread and showing its talons. It seemed massive.

“It frightened the life out of me. I managed to get my hands up to protect my head.
“I managed to duck down and the owl flew off hooting loudly.

“It may have been the street lights shining off my bald head that attracted it but I also have a goatee beard so I think it might have been after that.

“When I got to work I told my mates I’d just been attacked by a great big owl they all just laughed – and then I saw the story about the eagle owl on the loose and recognised the bird.”

In the wild the bird has been known take foxes and even small deer.

Some wildlife experts have recently called for the reintroduction of eagle owls in Britain as part of a move to ‘re-wild’ the countryside with predators such as lynx and wolves.

The bird hit the headlines last year when a rogue owl took up residence in a Dutch town for a whole year, forcing some who lived there to arm themselves with umbrellas at night.

Dubbed the ‘terror owl’ by resident of Purmerend, north of Amsterdam, the European eagle owl was suspected of more than 50 attacks on humans, swooping from above and leaving victims bloody and bruised.

The animal was eventually trapped by a falconer.

Lee Hayman, who runs the Wild Experience in Exeter, said there were “loads” of other eagle owls kept in captivity in the Exeter area.

“People should not be worried, eagle owls do not eat cats or dogs. If this bird was faced with a cat it would simply fly off. They are gentle giants.

“They only eat when exceptionally hungry and then it would be crows, pigeons and carrion.”