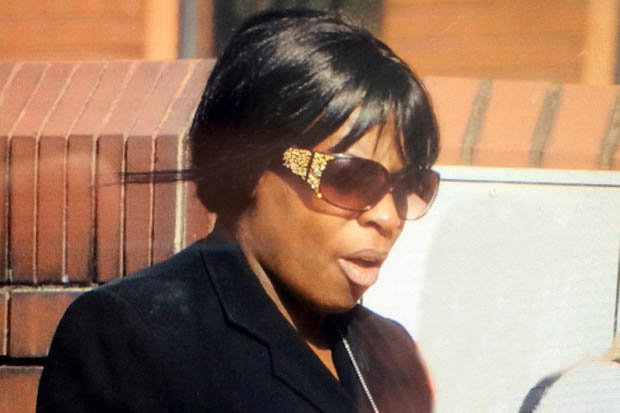 A mum who was high on cannabis when she killed her teenage daughter and her son’s girlfriend in a 70mph horror smash will walk free from prison in just 12 months.

Anastasia James, 38, lost control of her convertible Vauxhall Astra when it veered across all three lanes of a motorway and ploughed into a tree.

Her daughter Destiny James-Keeling, 14, and Megan Marchant, 18, were killed instantly in the crash on January 4, 2014.

James’ son Wade James-Keeling, 18, survived the collision near junction 19 of the M1 with a punctured lung.

The mum-of-three was found guilty of driving without due care and attention while unfit through drugs following a trial at Leicester Crown Court last month.

Yesterday (Tue) she was sentenced to two years in jail but will be released on licence after serving just one year behind bars.

And she will also be back on the roads by 2019 after being given a two year driving ban, to be served upon her release.

The court heard two young lives had been “extinguished for the sake of a few drags of cannabis” and James had “hid her remorse” throughout her trial.

James, of Braunstone, Leicester, dressed in a black suit and white shirt, showed no emotion as she was sentenced.

Recorder Paul Mann QC told her: “No sentence can adequately reflect the value of those lives or compensate the degree of suffering.

“Al I can lawfully do today is pass a sentence which is commensurate to the offences you have been convicted of.

“In the early evening of January 4, 2014, you drove your motor car from London back towards your home in Leicester.

“You had three passengers, your 14-year-old daughter, your 18-year-old son and his 18-year-old girlfriend.

“Just before you set off, or during your journey, you smoked cannabis. The cannabis impaired your ability to drive.

“About 1km from the M1 junction going north you lost control of your car. Traffic was calm and you were on a straight stretch of road.

“Having overtaken a car in the middle lane you pulled in, after which your car began to drift first to the left then to the right.

“Your impaired ability to react to the situation meant that your vehicle began to rotate, entered the central reservation area before shooting across to the other side of the carriageway.

“It’s apparent that you did not brake. Your vehicle left the carriageway at or around 70mph.

“The car mounted the steam drain, becoming airborne before landing front first into the ground.

“It collided with a large tree, still doing 40 or 50mph. The collision killed your daughter and Megan.

“Your son was injured – he suffered a punctured lung, a fractured left lower arm and nose.

“You were found to have 2.5 nanograms of cannabis per millilitres of blood afterwards.

“The amount at the time of the collision would have been significantly higher.

“For the sake of a few drags of cannabis the lives of two young people were extinguished.

“I want to believe there is genuine remorse from you, but you have certainly done your best to hide it during the course of your trial.

“All I saw was a hardened determination to hide your responsibility, but I am willing to accept that there is some remorse.”

During the trial the court heard James, a private investigator, crashed the car on her way back from a birthday party at junction 19 on the M1 just after 7pm.

She told the court she used to smoke cannabis but had given it up in favour of the legal high Mamba, which is what she believed she had smoked the night before the tragedy.

However, a blood sample taken after the crash, showed her to have recently used cannabis “within two hours” of the crash.

In a victim impact statement read out by prosecutor Michael Evans QC, Megan’s father, Scott, said: “My world was torn apart when I was told the news of Megan’s death.

“You never think anything like this is going to happen to your own family.

“I was not able to talk to anyone, I did not want to. The days up to and including the funeral were the hardest I have ever been through.

“You do not expect as a mother and father to have to bury your own daughter.

“From initially thinking this was a tragic accident to being informed this was to do with drug driving and could have been avoided has been devastating.

“For it to go to trial has only prolonged the agony. The last two years have nearly destroyed me.

“I have nearly lost my friends because of how losing my daughter has left me.

“I don’t know I we can rebuild our lives, but we will have to try.”

In another victim impact statement read out by Mr Evans, Megan’s mother, Vicky, added “Megan was the most beautiful, caring and thoughtful daughter I could have ever wished for.

“There was not a day went by where I did not communicate with her. Megan had a natural gift to light up any room she entered.

“Although Megan had a short life, she treasured everything in it. Everyone misses her terribly.

“A part of us all died when Megan died. We have been given a life sentence of grief.

“To think I will never get to see or hear her voice again fills me with indescribable pain.

“She was a unique young lady who had dreams and ambitions to fulfil, but sadly she will not be able to do this through no fault of her own.

“Not a moment goes by when I do not think of Megan.”

James House, defending, said: “These are the very worst cases for all concerned.

“It is quite apparent that Miss James feels a huge amount of remorse. She has lost her own daughter.

“She is a lady who has brought up two children and now has a third. It’s clear that life was difficult to begin with.

“She was a single mum, but she did it and at the same time she also bettered herself.

“She has volunteered for a number of organisations and many people’s lives are better because of her efforts.

“She was unable to return home after the accident due to the memories.”