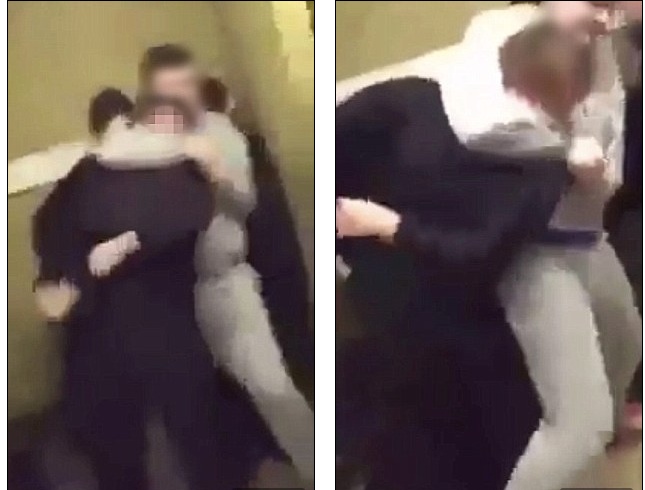 A schoolboy who launched a sickening attack on a fellow pupil which was caught on video has been suspended for just two days, the victim’s furious mother has revealed.

Brutal footage shows how the 15-year-old boy grabbed his victim from behind and delivered a series of blows to the side of his head.

It is thought the fight broke out after the victim accidentally threw a dodge ball at the other pupil’s face in what appears to be changing room.

The shocking attack at Fraserburgh Academy, Aberdeenshire, was filmed and shared on social media.

In the video, the attacker can be heard repeatedly asking if he “thought it would be funny to hit a ball off my face”.

And another youth, from behind the camera, can be heard shouting “stamp on his head”.

But the mother of the attacked boy, who cannot be named for legal reasons, has been told that the brute would only be suspended for two days.

She is now demanding a tougher punishment be given to the 15 year-old who has been charged by police.

She said: “They said he had to be back in school on the Friday because it was a holiday.

“It’s unacceptable that people can just come up from behind and start punching people on the head.

“Something has to be done about the videos. They have to stop, people even think about taking their own lives because they feel humiliated.

“Because it happened on school property I want to be in a room and see why this kind of thing is happening.

“If it didn’t happen in the school then I would have to go to the door and ask if this was correct.”

Mary Melville, vice chairwoman of the Fraserburgh and District Community Safety Group, likened the fight caught on video to the stabbing of Bailey Gwynne, 16, at Cults Academy in Aberdeen last October.

She said: “It happens in a flash and you can’t help but think of Bailey Gwynne.

“It only took seconds for him to get killed.

“I don’t blame the teachers, although I would hope they would be able to spot any resentment between pupils in their classes.”

Vincent Docherty, Aberdeenshire Council’s head of secondary education, said: “The video shows completely unacceptable behaviour and this incident was appropriately dealt with at the time.

“Any form of violence within school grounds is treated very seriously and we will not tolerate this sort of behaviour.

“As the recent inspection report highlighted, learning at the school has been transformed in recent years, including a 6% increase in S4 National 5 passes.

“It would be a shame if a minority of individuals were allowed to tarnish the image of the school.”

A Police spokeswoman said: “Police Scotland can confirm that a 15-year-old boy has been charged in relation to an assault at Fraserburgh Academy on March 30.

“He will be reported to the Youth Justice Management Unit.”