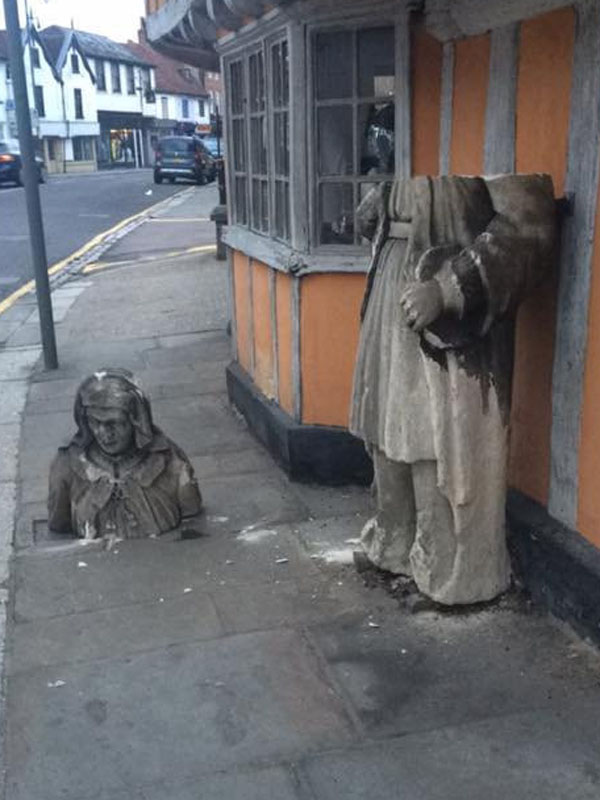 This is the moment a 150-year-old statue was “beheaded” by thugs, sparking fury among angry residents.

The figure, which is believed to be of 15th century printer William Caxton, was split in two during the early hours of Easter Saturday (Mar 26).

But yesterday (Tue), as part of a criminal investigation into the incident, Hertfordshire Police released CCTV of the “barbaric” act to try and help catch the culprits.

As seen in the footage, two people can be seen loitering close to the statue before making repeated attempts to move it.

After pushing it backwards the forwards they then dislodge the head before it tumbles forward on to the pavement.

PC Paul Scott of Herts Police, said: “I would like to speak to the two people pictured as part of my inquiries.

“I appreciate the CCTV image is not of the best quality but it could be someone recognises these people and could help to identify them.

“A few cars pass the scene during the incident and I would also appeal to those drivers to contact me in case they can assist with the investigation.”

The limestone model has stood outside antique shop Beckwith and Son in Hertford, Herts., for almost 50 years.

Amy Jayne Partner, 20, found the separated sculpture while on her way to work at 6am on Saturday (26/03) morning.

She said: “It’s outside a little antique shop and it’s been there for years before my parents were even born.

“Everyone around here knows it as an old land mark and I was just so shocked to see it on the floor, some people are so careless.”

Gordon Gray, owner of Beckwith and Son, said the statue would cost hundreds to repair and that it is not the first time it has been damaged.

Mr Gray, 73, who retired earlier this year after working at the shop for 47 years so he said it was a bit of a symbolic way for his days to come to an end.

“Somebody got hold of it at around 3am and tried to wrench it from the wall and the stone snapped across the middle.

“They then pushed the head onto the ground which I managed to move in the morning.”

Mr Gray bought the sculpture in 1970 and it originally came from London.

He added: “We hope to get it repaired but then there is always the temptation for someone to do it again.

“It’s such a landmark in town.”

Hundreds of residents in the community took to Facebook to voice their anger
and even compared the destruction to when Isis fighters destroyed artefacts in the Middle East.

Jennifer Cheong posted: “No different to the Taliban destroying Babylonian artifacts and statues that have stood for a millennium or more. Sad indeed.”

Commenting on Facebook, Emma Williams said: “That’s made me feel sad….there is no hope for my daughters generation with the world as it is.”

Tracey Jane Marsh added: “I don’t understand the mentality of these idiots.

“What possible pleasure can someone get from this mindless act of vandalism.

“I hope they are caught and dealt with accordingly. Not just a slapped wrist!!”

Facebook page ‘Spotted in Hertford’ also stumped up a £150 reward for any information which leads to the arrest of the culprit.

Others offered blue tac to attach the stone sculpture back together and another joked whether artist Banksy was behind the bludgeoning.