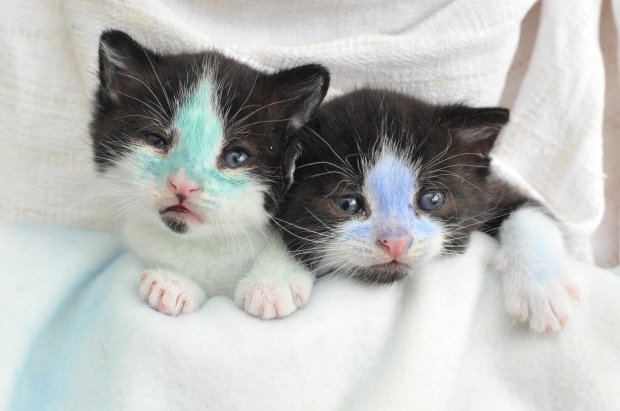 Two kittens have been named Smurf and Shrek by staff at a cat rescue centre – after they were found cruelly “coloured in” with marker pens.

The black-and-white feline pair had been defaced by callous yobs with blue and green pens when they were found by police and taken to Bradford Cat Watch Rescue Centre (BCWR), West Yorks.

Staff at the rescue centre immediately took them to a vets as they were unsure the level of damage the toxic pans could have caused – as cats lick their fur to clean themselves.

According to workers, the kittens are only about four to five weeks old and are very poorly.

Since their arrival on Monday (yest), staff at the centre have been giving the pair lots of baths to slowly try and remove the ink from their fur. They are also having bottles of milk to build up their strength.

An appeal has now been put out by BCWR to help fund the work they carry out.

Katie Jane Lloyd, from the sanctuary, said: “Here at BCWR Kittens we often consider ourselves to be unshockable, we have dealt with most situations but this is a first.

“The police arrived earlier with these two kittens who I can only describe as 4 to 5 week old who have been ‘coloured in’ most probably with a permanent marker.

“Thus is a dreadful act of cruelty and who knows what untelling damage this may have caused.

“We have sought veterinary advice and I have just contacted the poisons unit to ascertain what would be safe to use on them to try to remove the ink.

“The kitties are now going for a bath”.

The sanctuary are now appealing for help with the funds to care for the kittens.