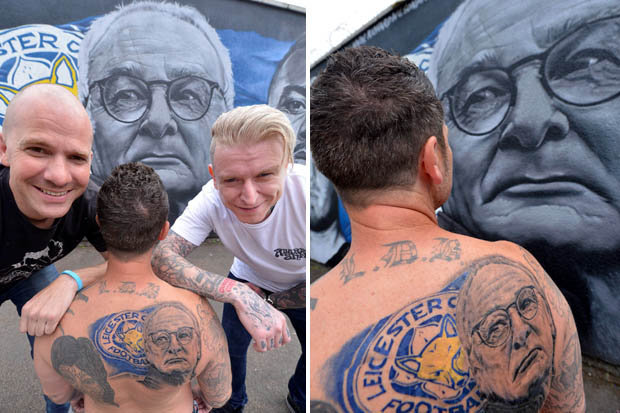 A Leicester City fan has paid the ultimate tribute to his beloved football team – by getting a giant TATTOO of manager Claudio Ranieri on his back.

The father-of-four went to Blue Ink Tattoo Studio in Leicester, co-owned by skipper Wes Morgan, for the elaborate design which depicts a life-sized image of manager Claudio Ranieri.

Tattoo artist Nik Moss-Glennon and Richard worked together to plan the new artwork, which also incorporates the Leicester City badge.

Lee’s Leicester dream became a reality on the morning of the victory bus parade on Monday (16/5), when the design was permanently etched onto his back.

Engineer Lee, from Braunstone Town, Blaby, Leics., said: “I’ve been going to watch Leicester play all my life – first of all going to Filbert Street with my dad when I was seven – and winning the Premier League was such an achievement.

“Ranieri is the man. People had asked if he was really the right man for the job, but he did us proud.

“I love the tattoo – people have given me some stick for it on Facebook, but they’re just jealous.”

Lee saw Richard’s mural online and thought it would make a nice tattoo on his back.

He added: “I ran it by Nik and then got in touch with Richard and said, ‘You’re a brilliant artist, can I get that on my back?

“I’ve had a few tattoos, so it didn’t bother me getting it done. As soon as Nik was finished I headed into town to meet my daughters to go to the parade.”

Nik, who has inked up the likes of Jamie Vardy, Jeff Schlupp, Christian Fuchs and Wes Morgan, said: “It was a big job but I was pleased with it.

“I used a template to get the basic shape and then the rest I just did from the photograph Richard gave me.

“I think his mural is brilliant.

“There’s no room for error when you’re doing a tattoo – especially when it’s a picture of the tattoo studio owner’s boss.”