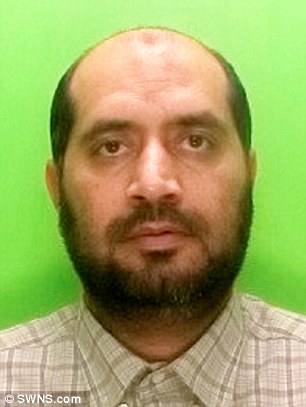 An Afghan asylum seeker was allowed to continue working as a taxi driver despite convictions of kerb-crawling before going on to rape a student in his cab.

Shapoo Azimi, 37, has been jailed for eight years for attacking the woman on the back seat of his private-hire vehicle after picking her up following a night out.

A court heard he raped the lone 22-year-old victim after cruising Nottingham on October 17 last year searching for young women to prey on.

Shockingly, Nottingham City Council had failed to notice Azimi was cautioned for kerb crawling in 2005 and convicted for soliciting a lone woman for sex in 2011.

The authority had now launched an internal investigation after admitting the past convictions should have been spotted.

On Monday (25/4) the cabbie was convicted of rape by a jury and was jailed at Nottingham Crown Court.

Sentencing, Judge Timothy Spencer told Azimi, who is married, that he had brought depravation on his family and himself.

He also raised concerns about how the “sexual deviant” had been allowed to work on the streets as a taxi driver following his previous crimes.

He added: “On that night, on October 17, you were working as a taxi driver in this city.

“You were, in my judgement, preying on young women. One of whom was the victim.

“You, in my judgement, were a chancer. You spotted your chance. She filled at least some of your desires.

“In particular she was clearly in a state of disorientation through alcohol and you decided, in my judgement, that she was prey for your sexual desires.

“Somewhere in that journey you decided rather than take her home, as your duty and obligation was to do, you were going to stop and take advantage of her.

“I know not if he was checked by taxi licensing, whether he withheld his relevant conviction or caution from taxi licensing, or whether they checked independently against records that must have been available to them.

“That conviction and caution reveal a situation where this man was wholly unsuitable to be driving a taxi anywhere and certainly within this city.

“It seems to me if the authority did carry out any checks they need to look carefully at the system and go to independent records, which I assume are available to them by going to the police.”

The court heard the victim had got into the taxi following a night out at Propoganda nightclub in Nottingham city centre at about 4am.

But just 15 minutes after she got into the car Azimi pulled over and climbed into the back seat where he raped the graduate student.

He left her on a street in Lenton, Nottingham, to find her own way home but he was later caught after his DNA was found on swabs taken from the victim.

Azimi even tried to blame the victim and claimed she had actually sexually assaulted him after he turned her down for sex.

He told the court he rebuffed the woman’s advances who “begged for sex” because he was “a professional man”.

But prosecutor Gordon Aspden said his defence was a transparent attempt to “get away with rape” and described the defendant as a “deviant” driven by “sexual compulsion”.

Azimi, of Bobbers Mill, Nottingham, was convicted of one count of rape but cleared of another relating to the same victim.

A Nottingham City Council spokesman said after the hearing: “This driver applied for a licence with us in 2008.

“His earlier caution and conviction undoubtedly should have been spotted in our background checks and acted on and we are very sorry that this didn’t happen.

“If we were presented with the same situation today, our procedures have improved sufficiently for us to be confident that he would be identified as a person who was not fit and proper to be a taxi driver, and so not given a licence.

“Our priority is to protect the public.

“We now demand higher standards of drivers and if there is the slightest doubt about a person’s suitability, we err on the side of caution and don’t issue a licence.

“We now carry out DBS checks every year rather than every three and our licensing team is now co-located with the police licensing team where intelligence sharing and closer working will allow issues like this to be identified and acted on.”

Detective Inspector Clare Dean, from Nottinghamshire Police, said: “As a taxi driver Azimi is entrusted to get people to where they need to be in a timely, comfortable and above all safe manner.

“He failed on all counts in this case.

“We know he actively targeted this woman over other potential fares.

“He then exploited her vulnerability for his own sexual gratification and abandoned her in the dead of night.

“Her welfare was never his concern.

“But her welfare has been our number one concern and this conviction is a testament to her resilience throughout.

“I hope this sentence helps her move on from this terrible chapter in her life and face her bright future with confidence.” TAXI DRIVER RAPED GIRL AFTER COUNCIL FAILED TO SPOT PAST CONVICTONS