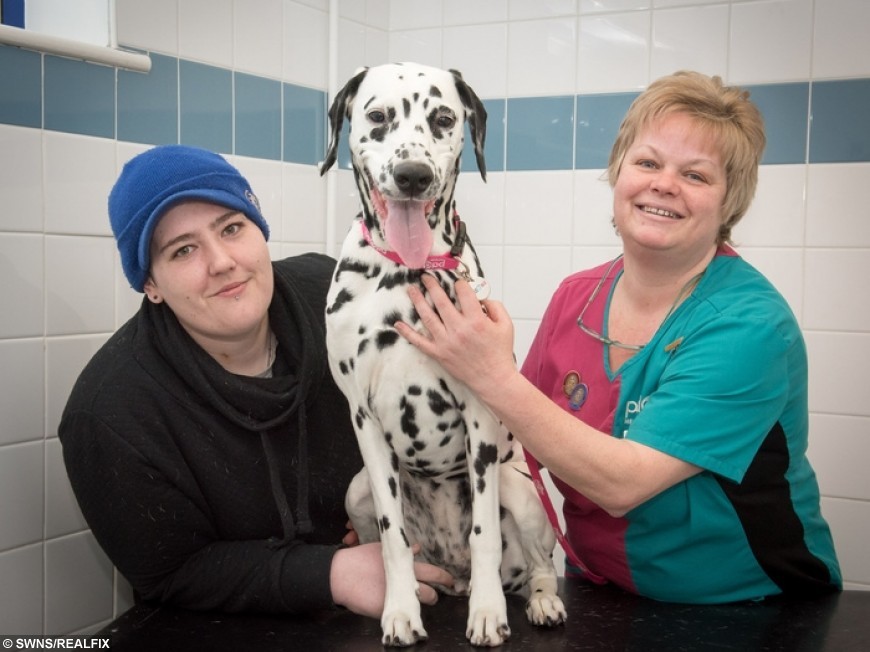 A greedy Dalmatian had to undergo emergency surgery after gorging on a “potentially lethal cocktail” of buns, chocolate and 36 dog chews.

Mischievous Molly wolfed down 36 Dentastix, as well as EIGHT sultana buns and a packet of mini eggs after sniffing out a bag of shopping that her owner Kerry Buck thought she had stashed away safely.

Kerry, 28, was horrified when she returned to her home in Middlesbrough, Teesside, to find her beloved eight-year-old pet seriously ill with sickness and diarrhoea.

Kerry said: “I’d only popped out for 25 minutes.

“When I got home, it was absolute chaos – Molly had been sick everywhere.

“I rushed over to her, and she was frothing at the mouth and very lethargic. I could see what food she had been eating so I rang PDSA straight away.”

Not only did the stolen food stash make Molly unwell, but vets revealed her life hung in the balance as sultanas and chocolate are “highly toxic” to dogs.

Molly was given immediate treatment at PDSA’s Middlesbrough Pet Hospital to stabilise her condition.

“Sultanas affect kidney function and can lead to organ failure, while chocolate contains a substance called theobromine, which attacks the central nervous system and can be life threatening.

“It never ceases to amaze me how pets can get themselves into trouble and get their paws on food – even when it’s supposedly out of reach.

“Thankfully for Molly, seem to be no lasting effects and she has made a great recovery.”

Molly’s treatment was funded by PDSA, which provides free vet care for sick and injured pets belonging to people in need.

“Molly means everything to me and without them I wouldn’t be able to keep her.

“I’ll certainly be keeping a very close eye on her in the future and will make sure any food is locked away.”