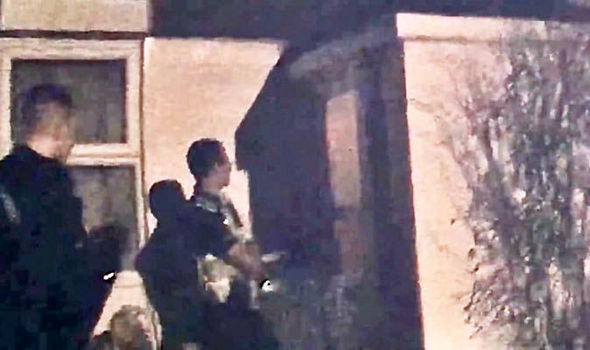 This is the terrifying moment a hero police officer was stabbed through the leg with a
samurai sword – but still manages to TASER the thug as he lies bleeding on the ground.

PC Rob Monk, 32, was armed with a taser and a shield as he and his colleagues at Northamptonshire Police swooped on the house of a suspected car vandal.

Another officer’s body cam captured the terrifying moment PC Monk wedged his foot in the door of the house moments before the suspect lunged at him with the sword.

The officer screams in pain as his colleagues ask him if he is ok, to which he replies: “No, I’m stabbed.”

His colleague, PC Gary Liddle hauled the injured officer away from the doorway and started to administer first aid.

Incredibly, the footage shows PC Monk clutching his left thigh as he lies bleeding on the ground while he fires a taser at the yob with his right hand to protect PC Liddle.

The officer was rushed to hospital where doctors discovered the sword had gone straight through his thigh narrowly missing a main artery.

PC Monk and his colleague PC Gary Liddle won a national Police Bravery Award following the attack which happened at 9.40pm on November 23, 2014.

They were responding to calls about a yob attacking cars with a baseball bat when they attended a house in Northampton.

After pulling his bleeding comrade away from the doorway, PC Liddle improvised a tourniquet, PC Monk used his taser to afford some protection to his partner while further help arrived.

PC Liddle then rushed his colleague to hospital for immediate treatment.

The two men collected their bravery award during a ceremony, sponsored by Police Mutual and organised by the Police Federation, in London last week.

Gez Jackson, chairman of the Northamptonshire Police Federation, said: “The bravery and professionalism shown by officers Monk and Liddle went above and beyond the normal call of duty.

“Both men put their own safety at risk, and PC Monk suffered a very serious injury in the process of trying to protect the public.”

Stephen Mann, CEO of Police Mutual, said: “This year marks the 21st anniversary of the Police Bravery Awards and the eighth consecutive year that Police Mutual has sponsored them.

“We are proud to continue our support for such an inspirational event in the Policing calendar and to be able to show our respect for the exceptional courage shown by police officers who risk their lives every day to protect the public.”