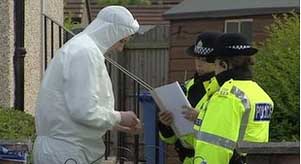 A murder inquiry was launched yesterday  following the death of a blind 94-year-old woman who was found with a fatal head injury at her home.

Daisy Myring died after a ‘burglary gone wrong’ at her home, neighbours said on Tuesday.

A 36-year-old woman and a 40-year-old man, both from Cannock, Staffs, have been arrested on suspicion of murder.

They were yesterday helping police with inquiries.

A post mortem revealed the pensioner, of Brownhills, Birmingham died as a result of a trauma to the head and body.

Mrs Myring was found at her home in Albion Road at around 7.10am Tuesday and was taken to hospital where she later died.

Neighbours said she lived on her own and was registered blind.

A police cordon remained outside the house yesterday as investigations continue and patrols have been stepped up in the area in a bid to reassure residents.

Sarah Astbury, a West Midlands Police spokeswoman, said: “A post mortem has taken place revealing the woman died as a result of blunt force trauma to the head and body.”

Police are appealing for anyone with information to come forward.

Acting Detective Chief Inspector Wayne Jones, of the Force CID, said: “We would like to appeal to anyone who may have information to come forward and contact us.

“Anyone who comes forward with information will be treated in the strictest confidence.”
Albion Road was sealed off yesterday following the discovery.”

Residents expressed their shock at what had happened with some speculating a burglary may have taken place, although police would not confirm that.

Mrs Myring had lived in the street for more than 20 years. She lived alone but was regularly visited by carers.