Residents were left feeling off-colour when a huge warehouse at the back of their homes was painted – bright YELLOW. 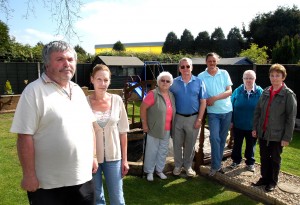 The building, which measures 100ft wide and 26ft high, was supposed to be grey with yellow trim.

But the warehouse is so bright, people living nearby complain that it now GLOWS in the dark.

The self-storage warehouse was erected on the Venture Business Park in Worcester two  weeks ago.

Horrified residents expressed outrage when they saw it has been given the garish makeover.

Barry Keville, 57, whose house backs onto the site, said: “It’s much bigger than we thought it would be and it’s the wrong colour.

“We were told it would be grey with a yellow trim when we first saw the application. It’s yellow. It glows in the dark.

“It was put up on a Sunday two weeks ago.

“I can see it from my bedroom window.

One neighbour, who did not want to be named, stormed: “The building looks like a giant Sponge Bob Square Pants looming over our houses. It’s disgusting and I can’t believe it’s been allowed to go up within a few feet of people’s homes.

“But the project went ahead after the developers for the firm ‘Stock N Lock Self Storage’ warehouse would be grey with yellow used only to trim doorways and pick out horizontal elements of the building.

Charles Rodway, managing director of Lansdowne Rodway and Crown House Developments, the firm behind the development, said: “It was always going to be yellow.

“We are great fans of bringing colour on to industrial estates. We have worked hand in hand with the planners.”

Mr Rodway said the warehouse was part of a £3.5 million investment into the area creating employment opportunities and jobs.

He added that trees would eventually be planted around the warehouse to screen it from nearby houses.