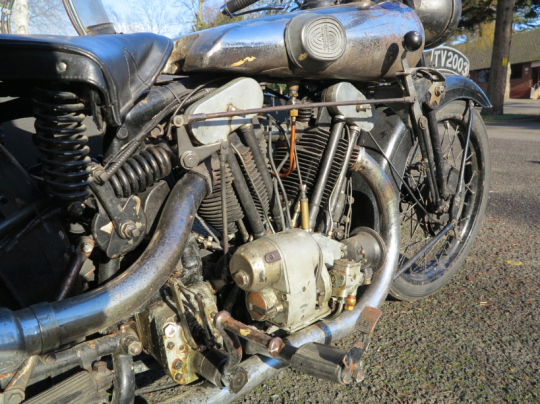 An unrestored model of the world’s most desirable motorcycle is expected to sell for a record-breaking £350,000.

The Brough Superior SS100 is regarded as the “Rolls-Royce of Motorcycles” – a title approved by the British car manufacturer.

It is currently owned by Frank Solano, who bought the bike 26 years ago and has ridden it around Europe.

He said: “I have owned TV2003 for a very long time and have travelled many mile with this bike to Austria, Switzerland, Germany, Italy, Spain, Norway, Sweden and Portugal on very many Brough rallies as well as all the annual rallies of the Brough club.

“As President of the club for a short while I was very active with this bike.

“I cannot recall how many miles I have done on the bike but I do remember all the enjoyment my wife Luise and I have had with it, as well as my grandson Derek. I liked the bike to the point of having a solid silver model created so I will very never forget her.”

Mr Solano has now decided to sell the 100mph bike and has entered it into the H&H Duxford auction, in Cambridgeshire, which takes place on April 19.

A number of Brough motorcycles will also be sold by Bonhams on April 24 in Stafford after they were discovered at a house in Cornwall.

George Beale, director of H&H Classic Motorcycles, added: “The fact that this magnificent motorcycle is unrestored only adds to its attractiveness for specialist collectors who might decide to restore or, indeed leave it in its present good condition much as it left the factory 86 years ago.

“It has been owned by just four previous owners, the last, the current vendor, Frank Solano has loved and used it on many rallies for the past 26 years.”

The motorcycles were built in Nottingham, at founder George Brough’s factory in Haydn Road.

They were capable of more than 100mph at a time cars would trundle along at 35mph.

TE Lawrence, better known as Lawrence of Arabia, was a famous owner SS100 owner. He died when he crashed his bike in 1935.