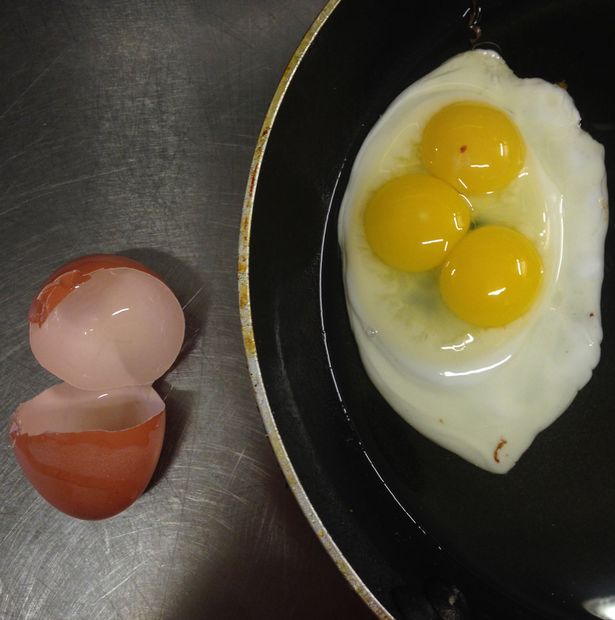 Two sisters were shell-shocked when they cracked open a couple of eggs for their Sunday brunch – and found a triple AND double yolk.

The hens belong to their older step-sister, Amy Guy, 25, who co-owns Island Farm in Thetford, Norfolk, and she uses the fresh produce for her restaurant, Amy’s Kitchen.

But dad Charlie, 67, believes their farm may be jinxed after one of their pigs gave birth to a mind blowing 17 piglets two weeks ago.

He said: “Two weeks ago one of our pigs on the farm had 17 babies and then I turn around and the chickens are producing huge numbers of yolks.

“When I saw the triple yolk I said ‘wow’ followed by a bit of a scream of ‘do not touch it’. I’ve never seen one of those before.

“I think our farm must be jinxed with all this mass-producing.”

Since breaking the eggs they have remained on display in the pan and they are now half cooked.

Megan, a business apprentice, added: “The eggs are still in the frying pan waiting for everyone to come and have a look at them.”

Bookmakers Ladbrokes put the odds of the cracking event happening at near to 2.2 million-to-one.

Spokesman David Williams said : “It’s unheard of. Our calculators nearly broke when we were asked to calculate the odds.”