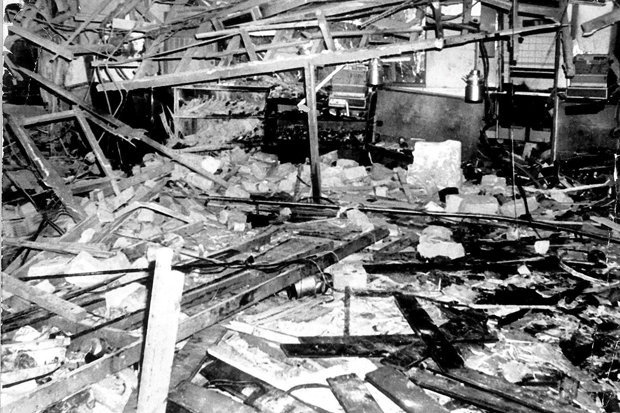 A coroner has ordered fresh inquests are to be held into the deaths of 21 people who were killed in the Birmingham pub bombings 41 years ago.

Senior Coroner for Birmingham and Solihull Louise Hunt made the historic ruling after revealing West Midlands Police had TWO different advance warnings about the atrocity.

A total of 21 people died and 222 injured in the devastating blasts at two Birmingham city centre pubs on November 21, 1974.

Six Irish men – known as the Birmingham Six – were jailed in 1975 for 16 years before their convictions were quashed in what is considered to be one of the worst miscarriages of justice in British history.

Yesterday (Wed) it emerged officers were warned by two individuals with connections to the IRA who told them “Birmingham would be hit next week” on November 9 that year.

The coroner said the information was reported to West Midlands Police but shockingly the report was filed away.

Detectives received a second warning on the day of the blasts when a man told them he had overheard Irish men discussing a plan to carry out the attacks in a pub in the Stirchley area of the city.

The man, who is only known as Witness B, was eventually seen by officers at the force’s Tally Ho Police Training College but when they returned to the boozer the men had gone.

Announcing her decision to reopen the inquests at Solihull Civic Centre Ms Hunt said she had “serious concerns” that police “failed to take the necessary steps to protect life”.

She added: “We are now 41 years after the bombings.

“There is no doubt that ascertaining the truth about what happened on November 21, 1974 will be difficult.

“It is still possible to ascertain how these 21 came by their deaths, something which has not yet been undertaken.

“I am of the view that the evidence does now need to be heard publicly so a decision can be made as to how these 21 people came by their deaths.

“As I have said I have serious concerns that advanced notice of the bombs may have been available to the police and that they failed to take the necessary steps to protect life.

“This is specifically in respect of the two matters I have identified.

“It is only in respect of that issue that I consider there is sufficient reason to resume an inquest to investigate the circumstances of these deaths.”

The coroner warned families of the 21 that the “outcome of the inquests may be inconclusive in some respects” and said a pre-inquest review would be held in the next three months.

But she said the two occasions where police were warned about the bombings was of “sufficient weight and concern to warrant further investigation”.

Speaking about the first warning Ms Hunt added: “From the evidence I have seen there is no indication that the police took any active steps in response to it.

“Instead the report was filed away. There may be good reasons why no such action was taken.

“However in the absence of a full explanation from those involved at the time as to why nothing was done, I am unable to exclude the possibility that this was a missed opportunity to prevent the attacks.”

Moving on to the second warning on the day of the attacks, she said: “I am not aware of any further action being taken that day regarding this incident.

“This is on a background of there being heightened awareness of an impending IRA reprisal attack following the death of the alleged IRA member James McDade a week earlier.”

Families of some of the 21 people who lost their lives have tirelessly campaigned for over 40 years for a new inquest to be held, claiming corrupt police covered up the truth.

In February, a hearing was told an IRA “mole” may have tipped off officers before the deadly explosions at the Tavern In The Town and the Mulberry Bush.

The proceedings were adjourned to allow West Midlands Police time to hand over all relevant evidence before a decision was made whether to hold a fresh inquest.

But yesterday coroner Ms Hunt rejected the “informant argument” as a basis for reopening the inquests.

She said: “That evidence does not support the suggestion that the police took any improper steps to protect a informant or anyone else after the bombings took place.”

The first blast went off at 8.18pm when a bomb exploded in a duffel bag in the Mulberry Bush pub in the Rotunda, Birmingham, killing ten people.

Two minutes later a second bomb went off in the Tavern in the Town pub, killing 11 more and injuring hundreds.

A third bomb outside a bank on the Hagley Road just outside the city centre also failed to explode.

The attacks were blamed on the Provisional IRA and six men – Patrick (Paddy) Joseph Hill, Hugh Callaghan, Richard McIlkenny, Gerard Hunter, William Power and John Walker – were convicted of the attacks in 1975.

They served 16 years in prison before being successfully released on appeal in March 1991.

And in 2014, Kieran Conway, a former senior officer of the Provisional Irish Republican Army (IRA), formally admitted the group’s involvement in the Birmingham pub bombings.

But no-one else has ever been arrested or charged in relation to the bombings.

Speaking outside after the decision, Patrick Hill, who was one of the Birmingham Six, branded West Midlands Police “rotten”.

He said: “It is the first step to finding out the real truth behind the Birmingham Pub Bombings.

“A massive cover up has been complicit, the judiciary, the Government and the Birmingham police, over the last 41 years, and that cover up is still going on today.

“I know the truth, I want this for the families, they’ve have their whole world’s collapse twice.

“Once when we got convicted and they had something to focus on, they thought the guilty people were in prison.

“And when we get released and ever since then they’ve been fighting for this for 20 years.

“Not only that since we got out all the Birmingham police have done with the families is tell them lies, lies, lies because that’s the only thing they are good for is lying.

“Of course they (West Midlands Police) don’t want it (inquest to be reopened) because there’s too many skeletons in the cupboard.

“They knew and they had advanced warning before the bombs went off and they never took any notice and they didn’t take any steps to prevent it.

“If they had of done, people that planted the bombs would’ve been caught and convicted.

“Instead they let it happen and this is the result of that, 21 innocent people have lost their lives and 200 people injured all down to the Birmingham police.

“As far as the bombers are concerned there was a statement made in 1982 that the people who did the Birmingham Pub Bombings were walking the streets of Dublin as free men.

“Ireland has an extradition treaty, they set it up with the British Government, they extradite anybody that was in the Republic of Ireland.

“Not once has the Birmingham police or the British Government ever asked for them to be arrested in Ireland, questioned and extradited.

Asked if he thinks the inquest will reveal the whole truth about the Birmingham Pub Bombings, Mr Hill added: “I am very sceptical because I don’t think the Birmingham police could spell the word truth let alone tell it.

“They are rotten. This is a start yes. This is the first step on the road to hopefully getting a bit nearer the truth.

“But whether we will get the whole truth I am not sure.”

Speaking after the hearing, Julie Hambleton, 53, whose sister Maxine, 18, died in the blasts, said: “This is way beyond our expectations.

“All we want is to be heard so we can get to truth, justice and accountability.

“In light of what the coroner has now decided to do to resume the inquest, anything is possible.

“We stand united. I am so proud of all the families and the legal team.

“I cannot put into words how we feel. My brother and I were crying.

“An inquest gives us the opportunity to hear all sides and to hear from people we wouldn’t normally hear from.

“So on the basis of that, that could then lead to other things like the truth.

“The truth is fundamental, and like Hillsborough, they have got the truth. Now they want accountability.

“That is how we foresee our line of enquiry going through the process of the inquest.

“Our view of the senior management of West Midlands Police is one of nothing but contempt.

“You have to remember I wrote to the Chief Constable who was then Chris Sims in 2009, asking him what he was going to do to look for the murderers of the Birmingham pub bombings.

“He got his inspector to write back telling me basically he was too busy for the likes of me.

“Remember this was the biggest atrocity of England’s peace-time history, the 20th Century.

“Our loved ones did not ask to be murdered that night.

“We’re not going to allow them to die in vain.

“What sort of a society are we leading for future generations where we allow mass murderers to walk free, to come to our fantastic city, kill without impunity without any fear of retribution.

“So does that mean to say we are giving a green light to future terrorist organisations to do the same because they know they won’t be prosecuted?”

In a statement, Chief Constable Dave Thompson, from West Midlands Police, “welcomed” the coroner’s decision despite the force previously saying there was “no evidential basis” to resume the inquests.

He said: “I support the Coroner’s decision and West Midlands Police will assist the process now underway.

“The Birmingham Pub Bombings of 1974 are one of the most serious terrorist attacks in the UK.

“West Midlands Police not only failed to catch those responsible but caused a miscarriage of justice.

“I have said and reiterate again, it is the most serious failing in this force’s history.

“It is almost 42 years since these events. I understand families of those who lost their lives are frustrated, disappointed and angry.

“Since 2012 and directly as a result of the campaign by families of those who died we have carefully reassessed the opportunities to bring the people responsible to justice.

“Despite an intense scrutiny we have not been able to see, at this time, a prospect of doing this. That has been an authentic and painstaking search for the truth.

“We have not nor will not close this investigation.

“West Midlands Police will support this enquiry as we have done through the recent hearings by the Coroner which determined whether the inquest should re-e-open.

“I hope the new inquest provides answers to families.”