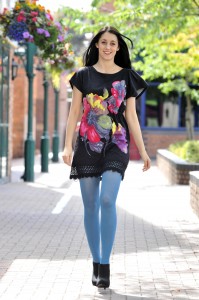 SHE’S a far cry from the stereotypical stuffy old politician, but councillor Jodie Jones is causing a stir at her local town hall – and is already being dubbed ‘Britain’s sexiest councillor.’

The Tory politician – who gave up her social life to pursue a career in politics – certainly looks like she would be more at home on the nation’s catwalks than council chambers.

Stunning Oxbridge graduate Jodie was elected as the youngest councillor on Cannock Chase District Council earlier this year making her a surprising addition to the Staffordshire authority.

A far cry from the often dour-looking men and women sitting on Britain’s council’s,the glamorous 23-year-old has sure been turning heads at the council chambers.

While the down-to-earth beauty is representing the voice of Britain’s youth generation, she freely admits that she enjoys a night out on the town with her friends.

And judging by her Facebook profile, she’s certainly not shy – as a range of pictures show her in clinches with female friends, partying in a bikini and sitting in the street holding two bottles of booze.

But her lifestyle as a young girl has not been to the taste of all of her colleagues.

Councillor for Heath Hayes and Wimblebury, Diane Todd, said: “These pictures do not show the behaviour she should be displaying.

“That’s not the behaviour I expect of a councillor, she needs to make sure that she isn’t seen sat swigging from bottles like this.”

Fellow councillor, Christine Mitchell, warned Jodie she need to make sure her normal lifestyle doesn’t get her in trouble.

“We all know what young people do,” she said. “I’m sure if you go out on a Saturday you’ll find the older councillors inebriated as well, but she has signed up to a code of conduct.

“She must make sure that she doesn’t do anything or say anything that might bring the council into disrepute.”

But pretty Jodie says the transition from politics student to politician has taken a toll on her personal life, sacrificing love and friendships along the way.

“I hardly have any time for a social life these days,” said Jodie, who grew up in Cannock having been born in Huntingdon.

“The election definitely took its toll. A few friends fell out with me completely because I couldn’t make it to parties and events I was expected to attend.

“It offended a few people that the politics had to come first, I just couldn’t be around for them as much as before.

“I don’t have any time for a boyfriend, I will probably be able to one day, but for now I have enough responsibilities with my job.

“I still go out with my friends when I can, we go out for a few drinks and a laugh but I have to be careful with what I say and who I’m talking to these days.”

For Jodie a life in politics has always been the dream, but she admits her age can make life in the council more daunting.

“It does feel more intimidating standing up and talking in council meetings for me than the older councillors,” the councillor for the Rawnsley ward added.

‘You think in the back of your head that they will put you down for being young and inexperienced and that puts you off speaking out a little bit.

“No one’s ever actually given me that kind of reaction seriously, anyone who’s said anything like that has always been joking, but it’s still in the back of your mind,”

Not only has Jodie’s presence improved the look of Cannock council, she’s also attempted to bring a fresh view of politics into the council chamber.

“I’m a conservative councillor, so I know what I believe in, but I try to put all party politics aside when dealing with my ward.

“If the majority of my constituents want something I will fight for it.

“During the election I refused to criticise any of the other parties in my literature, they criticised me personally but I stayed out of that.

“I’d think young people are put off politics by all the arguing. We need to show that if someone has a good idea it is a good idea no matter which party they work for.

“If you compromise your views just because of the party you’re a member of then what’s the point of having views and being a politician?

“With young people today there’s a lot of talk about the riots and drinking culture, but we need to remember it’s only people who do bad things who get the coverage, most young people aren’t bad.”

Jodie, who graduated from with a degree in Politics and History from Oxford in 2009, currently works in the office of Cannock’s MP Aidan Burley and is hoping to follow her boss to Westminster one day and even possibly taking the top job.

“I definitely see myself in Parliament one day, and who knows what might happen, I won’t rule anything out –  I could be Prime Minister one day.”